LOS ANGELES, CALIF. (August 30, 2021) — Sports Gambling Podcast Network™ will launch the new National Football League season with a free $100,000 contest for its consumer audience, rewarding the person who picks all 16 games against the spread and hits on six of six over/unders from Sept. 9-13.

The contest begins on Wednesday, Sept. 1, and fans can enter on the SGPN App, which is available on all devices and is downloadable at Apple’s App Store,  the Google Play Store, and from www.SportsGamblingPodcast.com. SGPN is the only independently-owned and operated sports gambling media networkthat places a premium on entertainment value. 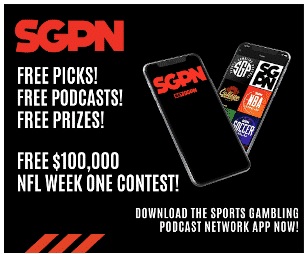 The no-cost app, which debuted in June, includes content for sports wagerers on the move from over 45 SGPN writers and personalities plus exclusive access to multiple, free audience contests, now including the $100,000 Week 1 NFL Challenge.

In accordance with contest regulations, only one entry is permitted per person and the total number of eligible participants is 5,000.

“Our audiences are loyal and they deserve the opportunity to convert a big payday,” stated Sean Green, SGPN co-founder, CEO and co-host of the popular Sports Gambling Podcast . “Interest is at a fever pitch now with preseason games in the books and the level will reach its apex that second week of September when the new season commences. Winning the cash will require a little bit of luck, but our audience is savvy. We actually think someone will pull this off.”

SGPN is all over the upcoming NFL season, providing its audiences with insights, analysis and definitive selections non-stop during the pre-season window.  On July 13-14, the unprecedented 24-hour Fantasy Football Draft by SGPN expert Ryan Kramer resulted in over 100,000 minutes watched and a 100% approval rating from the audience.”

The most recent contest for app downloaders was an NBA playoffs contest with a $1,000 winner-take-all cash prize. The winner identified the Milwaukee Bucks as NBA Champions and correctly predicted that the series would be over in exactly six games.  The tiebreaker prediction of total number of points scored in those games was needed to determine the winner.

Green and Kramer were among a handful of sports wagering information providers who produced live shows concurrent with the first round of the NFL Draft on April 29, delivering a second screen experience to avid fans looking for real-time, expert analysis as they viewed the selections and engaged in live wagering on the many legal sportsbooks in the marketplace. The show was delivered from SGPN’s new ultra-high definition 4K studio and resulted in substantial growth in viewership minutes over the 2020 show.

In all cases, Green, Kramer and the Sports Gambling Podcast Network of writers and personalities provide analysis, picks and best bets free of charge.

Sports Gambling Podcast Network™ was established in 2011 as one of the first website/digital media platforms to provide consumers with an entertainment experience featuring sophisticated insight and analysis plus definitive wagering recommendations and selections across the full spectrum of legally-available sports. Co-founded by sports and entertainment personalities Sean Green and Ryan Kramer, it is home to the Top 40 All-Time football podcast (per Chartable.com) Sports Gambling Podcast, one of 11 separate podcasts.  The website, www.sportsgamblingpodcast.com, boasts over 50 contributors delivering editorial content and social media postings under the SGPN banner.  The platform generates millions of unique page views and podcast downloads annually and remains a primary destination for the burgeoning population of sports fans across America and around the world. In addition to his stand-up comedy act, Green is an accomplished TV comedy and script writer with credits including MTV’s Ridiculousness and Nickelodeon’s Crashletes with Rob Gronkowski.  He has also anchored several sports wagering and fantasy sports shows for SiriusXM and ESPN+.  Kramer is a SiriusXM contributor and a sports wagering marketplace influencer who specializes in NFL game prop bet predictions.  He has multiple top finishes in the Fantasy Football Players Championship (FFPC) Main Event and registered a 14-6 mark last month with his Men’s NCAA Tournament college basketball locks.SGPN is a member of the Fantasy Sports Gaming Association (FSGA).